I am the glambolic superstar and I’m happy to grace any stage or event, from cabaret song and stories to tits and teeth – it will be flaunted.

For over 9 years I’ve performed at various festivals, club circuits and other nooks and crannies across the country either with or without the proprietor’s consent, with a mix of timeless entertainment and big ego.

I am based in the wonderful city of Norwich, in Norfolk (that’s in England, in Great Britain, in the UK in Europe… at least for the time being).

As the one and only Tangerine-haired Queen you may have heard me wittering away whilst featured upon the wireless on BBC Radio Norfolk, BBC Radio Cambridgeshire and also Future Radio, where I sung live over the air-waves to the infinite requests from my many adoring fans.

Having been born and raised above an Award-winning Fish and Chip shop of the North Norfolk Coast, I am now used to the finer things in life – having moved on from wooden chip forks and stacking cockle jars.

With my wonderous legs (those that many women screech their jealousy over) I now tour the country and beyond, entertaining crowds of different breeds, shapes and sizes at public and private events. My favourite public appearances over the past couple of years include: The Pink Festival (Cambridge), Norwich Pride, North Norfolk Pride, Broadminded ArtsFest, Norfolk Brides business and networking launch.

“Some posh punked-up chick who belts out a good song and wipes her feet as she leaves.”

Previous jobs:
Alas I was once a make-up counter girl in an up-market department store until it was decided my eye-shadow techniques were not suitable for middle-class ladies of leisure who were just passing the time whilst their husbands played golf and had their backs epilated. I’ve also been a columnist for a tabloid newspaper until my answerphone machine got handed in. I spent my youth avoiding argumentative adoptive parents, standing on a box in front of the deep fryer, shuffling chips at an award-winning fish and chip shop on the North Norfolk coast.

Biggest audience:
Apart from my Internet appearances (there were hundreds of thousands of hits until the United Nations told me I was flaunting the law in at least 42 countries) my largest crowd in person was 10,000 people (children, families and supposed grown-ups) at East Anglia’s Pink Festival. 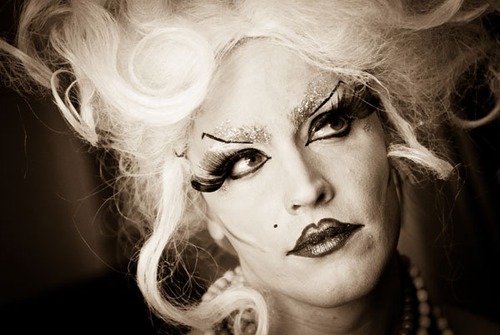 I had the most loveliest of afternoons with my Storytime with Auntie Titania. I was even joined by the author herself Molly Potter at Books For Amnesty here in Norwich. Thank you to all who came along! #lgbtplushm